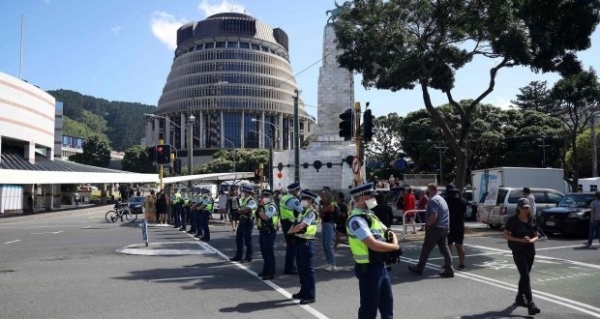 Police take over an intersection leading to parliament in Wellington on the ninth day of demonstrations against Covid-19 restrictions in New Zealand. Photograph: Marty Melville/AFP via Getty Images

New Covid-19 infections have hit a record high in New Zealand while hundreds of people protest outside its parliament against vaccine mandates.

More than 1,100 cases were reported on Wednesday after some restrictions were eased this month.

Protesters inspired by truckers’ demonstrations in Canada have blocked several roads around Wellington’s “Beehive” parliament for nine days with trucks, vans and motorcycles, and camped out on the lawns in front of the distinctive building.

“There has been an influx of protesters at parliament today, including children. However, the crowd had been orderly,” Assistant Police Commissioner Richard Chambers told reporters, estimating there were about 450 vehicles blocking the site.

“This is a very complex situation and we are mindful of the tactics we need to take so that the situation is not escalated,” Mr Chambers added.

Police gave protesters an ultimatum on Tuesday to move out or officials would start towing and seizing vehicles.

Mr Chambers said on Wednesday police had made some progress in engaging with protest leaders and about a dozen vehicles had left voluntarily. However, many others ignored the warning.

The protest started as a stand against Covid-19 vaccine mandates but those demonstrators have been joined by groups calling for an end to pandemic restrictions as well some drawing attention to other social issues such as censorship and rights of the ethnic Maori community. At the peak of the protest, thousands of demonstrators were estimated to be involved.

Prime minister Jacinda Ardern has referred to the demonstrations as an “imported” phenomenon and rejected calls to remove all restrictions at a time New Zealand is experiencing a surge in Covid-19 cases due to the Omicron variant.

While new daily cases are at a pandemic peak, New Zealand has some of the lowest Covid-19 case numbers in the world, largely due to tough coronavirus border curbs and social restrictions. It has reported a total of about 22,300 infections, including 53 deaths.

The country’s borders are still closed, with tens of thousands of expatriate New Zealanders cut off from families. Earlier this month, Ms Ardern said New Zealand would allow vaccinated citizens based in Australia to return from February 27th and would drop quarantine restrictions in favour of self-isolation and rapid antigen testing. It will phase in arrivals for its citizens in other countries, skilled workers and students over the following weeks and months, with a full reopening to non-citizens in October.

From February 28th, mandatory hotel quarantine will only apply to those who are unvaccinated or are ineligible for self-isolation.– Reuters