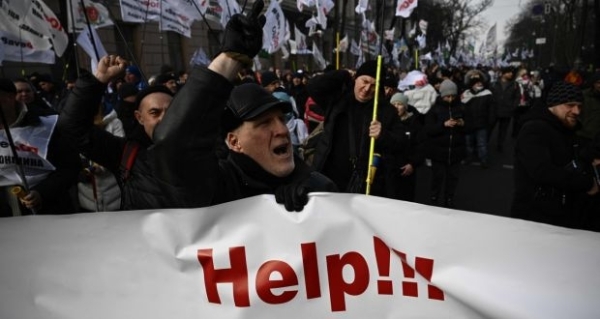 A protester shouts slogans during a demonstration outside the Ukrainian parliament against high government taxes in small business in Kyiv on Thursday. Photograph: Aris Messinis/AFP via Getty Images

Ukraine and Moscow-led separatists have blamed each other for a surge in shelling in the divided east of the country, as Russia accused the West of ignoring its key security demands and expelled a deputy US ambassador.

Military and diplomatic tension continued to rise as the White House warned that the Kremlin could order a major new invasion of Ukraine “in the next several days”, and Kyiv and its western allies said they saw no sign that Russia was genuinely withdrawing some of more than 100,000 troops that are now massed near its neighbour’s borders.

“The shelling of a kindergarten in Stanytsia Luhanska by pro-Russian forces is a big provocation,” Ukrainian president Volodymyr Zelenskiy said on Thursday after three people were hurt when artillery fire struck the frontline town in Ukraine’s eastern Donbas region.

Separatist leaders in turn accused Ukrainian government forces of indiscriminate shelling, and Kremlin spokesman Dmitry Peskov said “every moment risks crossing from the realm of information attacks into consequences that could cause a new outbreak of war in the immediate vicinity of our borders”.

He said Ukraine’s “huge strike potential” near the front line, “coupled with provocative actions that have only intensified over the last day or several days [make] this is a very, very dangerous situation”.

The increase in shelling in Donbas – where 14,000 people have been killed in an eight-year war between government troops and Russia’s proxy militia – came as the US and Britain warned that Moscow may use a staged attack or other “false flag” operation to justify another major assault on Ukraine, where it annexed Crimea in 2014.

“The spectre of Russian aggression has long hung over eastern Europe. Today it menaces our friends in Ukraine and threatens security and stability for us all. We stand shoulder-to-shoulder with Ukraine,” British foreign secretary Liz Truss said in Kyiv.

“Despite Russia’s claims, the military build-up shows no signs of slowing down. There is currently no evidence that forces are withdrawing. Russia must step back from the brink.”

Russia amassed the force as it made a series of sweeping security demands to the West, key among which are calls for Nato to bar Ukraine from ever joining the alliance, and for the bloc to withdraw its soldiers and weaponry from current member states in eastern Europe – steps that the US and its allies say are unacceptable.

“In the absence of readiness on the American side to agree on firm, legally binding guarantees on our security from the United States and its allies, Russia will be forced to respond, including through the implementation of military-technical measures,” Russia said in a letter delivered to the US ambassador in Moscow on Thursday.

Russia also listed steps that it said were “fundamentally important” to “de-escalate the situation around Ukraine”, including the need to “force Kyiv” to implement a 2015 framework peace deal for Donbas that Ukraine sees as strongly weighted in Moscow’s favour.

Russia also called for “a halt to deliveries of weapons to Ukraine, the withdrawal of all western advisers and instructors, the refusal of all Nato states to take part in joint exercises with the Ukrainian armed forces and the removal of all previously supplied foreign weapons from Ukrainian territory”.

At around the same time as the note was delivered, Russia also announced the expulsion Bart Gorman, the US deputy chief of mission in Moscow.

“Russia’s action against our DCM was unprovoked and we consider this an escalatory step and are considering our response,” said a spokesperson for the US state department.