Biden ‘convinced’ Putin has decided to invade Ukraine, including attack on Kyiv 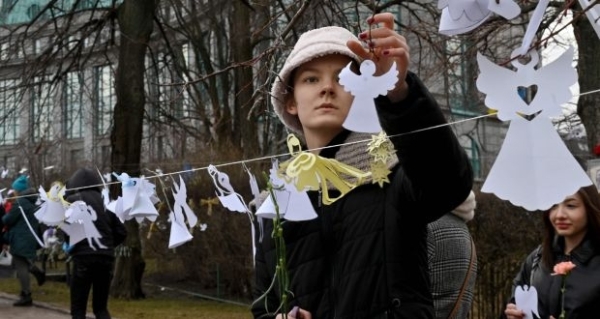 A person hangs symbolic paper angels to pay tribute to the “Heroes of the Heavenly Hundred”, the people killed during an anti-government demonstration in Kyiv in 2014, near Independence Square on Friday. Photograph: Sergei Supinsky/AFP via Getty Images

US president Joe Biden has said he is now “convinced” that Russian leader Vladimir Putin has made a decision to attack Ukraine.

Speaking at the White House on Friday he suggested that an invasion — including an attack on the Ukrainian capital Kyiv — could take place “ in the coming week, in the coming days”.

Mr Biden said the crisis in Ukraine was rapidly escalating. However he said Russia could still opt for diplomacy and to return to the negotiation table.

The US preident said he had spoken to allies in the west and all had “affirmed our readiness to impose massive costs on Russia should it chose further conflict” Mr Biden said Russia was setting out a false justifications for an attack on Ukraine.

“We believe that they will target Ukraine’s capital Kyiv, a city of 2.8 million innocent people,” Mr Biden told reporters at the White House.

“We’re calling out Russia’s plans loudly (and) repeatedly not because we want a conflict but because we’re doing everything in our power to remove any reason that Russia may give to justify invading Ukraine and prevent them from moving.”

Mr Putin is expected to oversee major strategic missile drills involving his country’s nuclear arsenal on Saturday, at a time of spiralling tension in and around Ukraine and deadlock in high-stakes security talks with the West.

Defence officials said the exercises would include launches from land and sea of ballistic and cruise missiles and test “the preparedness of military command centres, launch combat teams . . . and the reliability of the strategic nuclear and conventional forces’ weapons”.

Moscow describes the “Grom” (“Thunder”) exercises as “planned” – even though they usually take place in the early autumn – and insists they have no connection to Russia’s massing of more than 100,000 troops and heavy weapons near Ukraine.

“Putin will most likely be in the situation control centre. Such drills and training launches, naturally, can’t be held without the head of state. You know about the famous nuclear suitcase, the red button, and so on,” said Kremlin spokesman Dmitry Peskov.

The drills will take place a day before the scheduled end of joint Russia-Belarus war games that the US and its allies fear could provide cover for a new attack on Ukraine, where in 2014 Moscow seized Crimea and started a proxy war in the eastern Donbas region.

Russia insists it is now sending some troops back to base, but US secretary of state Antony Blinken said on Friday that “on the contrary, we see additional forces going to the border, including leading-edge forces that would be part of any aggression”.

Mr Blinken said he feared Russia planned “false provocations” to justify an invasion, as shelling intensified in Donbas and its Moscow-led militants ordered the evacuation of civilians due to a supposed threat of attack from government forces – which Kyiv officials flatly denied.

Speaking alongside him at the Munich Security Conference, German foreign minister Annalena Baerbock warned of “a new war impending right in the middle of Europe”.

“Russia issues an absolutely unacceptable threat with their troops build-up vis-a-vis Ukraine, but also vis-a-vis all of us and our peace architecture in Europe. Therefore, this crisis is no Ukraine crisis . . . It’s a Russia crisis. We therefore urgently appeal to Russia to draw down their troops immediately.”

Ms Baerbock said Berlin was ready to “pay a high economic cost” as part of severe economic sanctions that the West has vowed to impose on Russia if it attacks Ukraine again.

“For me and for us all options are on the table, including Nord Stream 2,” she said, referring to a controversial €9.7 billion undersea pipeline to carry Russian gas to Germany that is completed but awaiting a permit.

Ms Baerbock said Germany was not prepared to send weapons to Ukraine, however, prompting a sharp challenge from Kyiv mayor and former world heavyweight boxing champion Vitali Klitschko, who compared US provision of $650 million in arms to his country last year to Germany’s offer of a few thousand helmets.

“We are facing one of the strongest enemies in the world,” he said. “We are ready to fight, ready to defend our families, our state, our cities, our citizens. Thank you for 5,000 helmets but it is not enough. We cannot defend our country with that.”

EU foreign ministers are to gather on Monday to discuss the Russian military build-up, and will meet with Ukraine’s foreign minister Dmytro Kuleba over breakfast. The member states have prepared a package of sanctions to impose on Russia in response to any invasion of Ukraine.