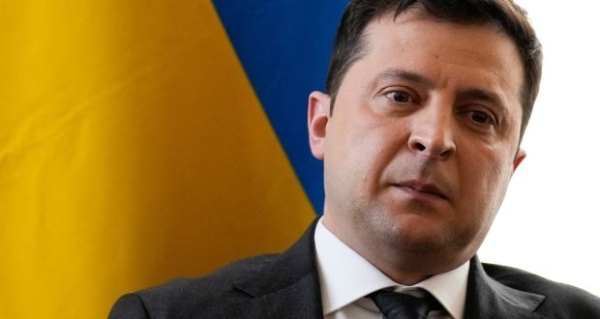 Ukrainian president Volodymyr Zelenskiy at the Munich Security Conference. ‘We don’t need sanctions after bombardment happens. After we have no borders, no economy. Why would we need those sanctions then?’ Photograph: Matt Dunham/pool/ Getty Images

Four storeys high, the haggard face of Jeremy Irons stares out from a storm-battered hoarding on the Kaufingerstrasse in central Munich. Advertising a new film of the same name, Irons as Neville Chamberlain tells citizens of Britain and the empire in an infamous radio address: “As long as war is not begun, there is always hope.”

The British prime minister’s hopeful diplomacy dash in 1938 ended in failure and, on Sunday in the Bavarian capital, hope of peace in Europe drained away once more. US secretary of state Anthony Blinken warned that Russia was “on the brink of an invasion” of Ukraine. These are different times and different political players, but this felt like another Munich moment.

There was an uneasy echo of 1938 when Ukrainian president Volodymyr Zelenskiy flagged Russia’s annexation of Crimea in 2014 with delegates, asking: “Has our world completely forgotten the mistakes of the 20th century, of where appeasement policy usually leads?”

As reports of shelling in eastern Ukraine landed on delegates’ phones, German chancellor Olaf Scholz knew who the Ukrainian leader was criticising for using history as a reason not to provide Kyiv with arms.

Deliveries of weapons from allies to fight one of the world’s largest armies was not, Zelenskiy added, a “noble gesture for which Ukraine must bow low”.

“It is your contribution to European and the world’s security,” he said. As for threats of sanctions against Russia, he asked: “What are you waiting for?”

“We don’t need sanctions after bombardment happens,” he said. “After we have no borders, no economy. Why would we need those sanctions then?”

In a moment of bleak humour the comedian-turned-president noted this year’s absence of senior Russian officials from a conference with just one item on the agenda: “You see Russia is not here, but they are here.”

Many here recall President Vladimir Putin’s 2007 Munich speech accusing the US of trying to create a “pernicious” unipolar world “in which there is one master, one sovereign”. Pushing Nato’s expansion eastward was, he said then, “a serious provocation that reduces the level of mutual trust”.

On Saturday, with news of conflict growing on the Ukraine-Russian border, Nato general secretary Jens Stoltenberg insisted the alliance he heads is defensive in nature.

US vice-president Kamala Harris conceded that “not since the end of the Cold War has this forum convened under such dire circumstances”.

She told Zelenskiy before a meeting that “any threat to your country we take seriously”, and, after talks with the Baltic leaders signalled that an invasion could lead to a bolstered American presence in the Baltic countries.

After weeks of bilateral diplomacy with Moscow, top EU officials came under fire from delegates for offering “no coherent strategy” involving all EU member states.

Minister for Foreign Affairs Simon Coveney said that, after two days of meetings in Munich, he was concerned that the focus had shifted to “dealing with the aftermath and consequences of a military invasion rather than managing to avoid it”.

A war in Europe would be a “human disaster”, he said, that would leave “everyone a loser”.

“Prevention is what has to be the priority rather than giving up on capacity for diplomacy,” he said.

Should Ukrainian refugees flee to western Europe, he said that Ireland would “respond generously and ensure we do our share”.

Chancellor Olaf Scholz, in his Munich debut, told delegates it was a “paradox” for Russia to use as its casus belli – occasion for war – Ukraine’s membership of Nato, something which is “not on the agenda”.

With the fog of war – and the ghost of Neville Chamberlain – haunting the Munich conference, Scholz described the West’s goal with Vladimir Putin thus: “As much diplomacy as possible, without being naive.”