When will Europe rise to rescue the Kashmiris? 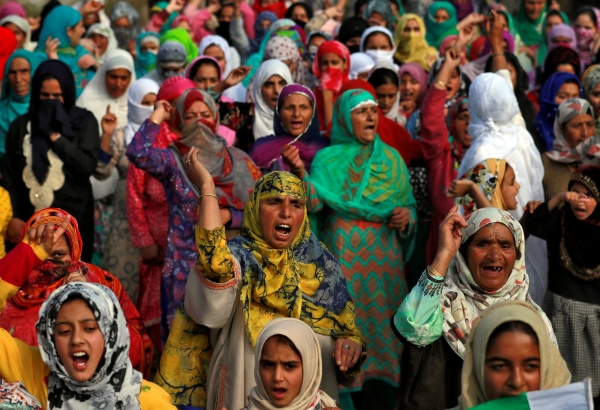 As a torchbearer of human rights in the world, Europe bears responsibility to protect the suffering Kashmiri people. Unfortunately, like the rest of the world, it has so far failed to meet this obligation.

Kashmir is a UN-recognised international dispute. The Security Council has passed several resolutions, which call for the holding of a free and fair plebiscite to determine the political aspirations of the Kashmiri people. This makes self-determination an inalienable right of the Kashmiris. Therefore, by revoking Article 370 of the Constitution, which granted the state of Jammu and Kashmir the special status and then annexing and dividing it into Jammu-Kashmir and Ladakh as two union territories, India has violated its international obligations on the dispute.

However, the fact that Article 35-A was also revoked alongside Article 370 is more worrisome. This is where both the scale and impact of India’s unilateral action on Jammu and Kashmir’s demography and identity becomes obvious. Article 35-A defined who could be a resident of the disputed region and only residents had the right to own and buy property, as well as have privileges with regard to employment and education. With this constitutional protection gone, the Kashmiri land is up for grabs.

As part of the saffron project, the Modi regime had started to fantasise the scenic Himalayan land for Hindu pilgrims and invite Indian investments there in the guise of tourism and development much before abrogating Article 35-A. In the past three years, it has openly encouraged non-Kashmiris to migrate and settle in the disputed territory. In fact, large tracts of Kashmiri land was granted to Indian investors and armed forces institutions.

For example, under the new Domicile Order, almost half a million non-Kashmiris, largely Hindus, have been awarded the residency status in the disputed region. Many of these new residents are security personnel and their families. They have been given the same right to land ownership and equal share in jobs and educational opportunities as the resident Kashmiris had enjoyed under the erstwhile Article 35-A.

The current population in the disputed territory is close to 14 million. For decades, with nearly three quarters of a million soldiers and para-military deployed, Kashmir rightly qualifies to be the world’s most militarised land. Human rights groups estimate that there is one armed person for every 17 civilians and roughly seven armed personnel to every square kilometer of land in the region.

The Indian militarization of the state of Jammu and Kashmir began with the eruption of insurgency in 1989. However, even before that, despite Article 370, autonomy of the disputed region had been violated many a times, through 47 presidential decrees and eight 8 Governor Rules, which led to the introduction of a series of draconian laws such as the Armed Forces Special Powers Act and Public Safety Act and consequent arbitrary arrests, enforced disappearances and extrajudicial killings. Human rights groups estimate well over 8,000 instances of extrajudicial killings since 1990, including nearly 2,000 during 2008-18.

In its first-ever report on the state of human rights in Jammu and Kashmir, published in June 2019, the Office of the UN High Commissioner for Human Rights stated that the Indian security forces used excessive force that led to unlawful killings of 145 civilians during 2016-18. A subsequent UNHCHR report of July 2019 found that Indian security forces often used excessive force to respond to violent protests that began in July 2016, including continued use of pellet-firing shotguns as a crowd-control weapon even though they have caused a large number of civilian deaths and injuries.

The situation in the disputed territory was also not conducive for its population before the eruption of insurgency in 1989. India’s strategy in the previous decades after the end of the first war over Kashmiri in 1948, was to undermine the political autonomy of Kashmiris through buying political loyalties or holding sham elections. Thereafter, until the fateful month of August 2019, it was to physically exterminate and internally displace the Kashmiri Muslim majority, constituting almost two-thirds of the population, first in the guise of counter-insurgency and then, post 9/11, on the pretext of counter-terrorism.

In 2019, India locked down the Kashmiris months before the Covid-19 pandemic locked down the world in 2020, through communication blackout, death and fear, and even imprisonment of pliable Kashmiri politicians. Like insurgency and terrorism before, the CIVID-19 pandemic has been the new cover for subjugating Kashmiri freedom voices, which in the worst of circumstances post-9/11, would sporadically spring up in youthful uprisings as a populous recourse for freedom.

To be sure, India has had a long-standing tradition of secular democracy, which is why the disputed region was at least granted limited autonomy until the Kashmiri dispute was peacefully resolved. The rise of Hindu nationalism, conforming to the global upsurge in populist but undemocratic regimes, has ripped apart the secular tradition, putting in jeopardy the fate of minority populations. What has happened in Jammu and Kashmir since 2019 is a reflection of Hindu majoritarianism.

Slowey but surely, the Kashmiris have seen their ancestral land being sold out for cheap through a new Land Act, which has empowered the non-Kashmiris to re-purpose agricultural land, constituting 90 percent of the region, for non-agricultural purposes. Thus far, close to 200 Indian laws have been introduced in the disputed region. The De-limitation Commission, created under the Jammu and Kashmir Reorganisation Act to redraw the political map of the disputed region, is now seeking to disenfranchise the Muslim-majority Kashmir Valley by proposing to create six new political constituencies in the Hindu-majority Jammu.

These efforts ultimately aim to create a new Kashmiri identity through displacing and excluding the indigenous Kashmiris, and handing over their land and resources to new Indian residents for colonial exploits. Therefore, unless the world rises to the occasion to preserve international law and protect Kashmiri self-determination, Kashmir as we have known with its peculiar demography, ethnicity and identity may soon become a footnote of history.

It is not just the worsening state of human rights in Jammu and Kashmir that should interest the nations of the European Union. Unless the Kashmir dispute is resolved peacefully, the relations between nuclear-armed India and Pakistan will always be at risk of military skirmishes turning into a full-scale war. Just three years ago, they fought an air combat following a terrorist incident in Jammu and Kashmir and India’s airstrike inside Pakistani territory which resulted in shooting down of Indian jets and arrest for an Indian pilot by Pakistan. This risk is even greater now with the possibility of an unprecedented humanitarian crisis in Afghanistan imploding into renewed regional insurgency later this year.

Therefore, the European nations must raise their voice on the deteriorating state of human rights violations in Jammu and Kashmir. The EU can go a step further, by offering its good offices to translate the fragile ceasefire along the Line of Control into a sustainable effort to resolve the Kashmir conflict between India and Pakistan.