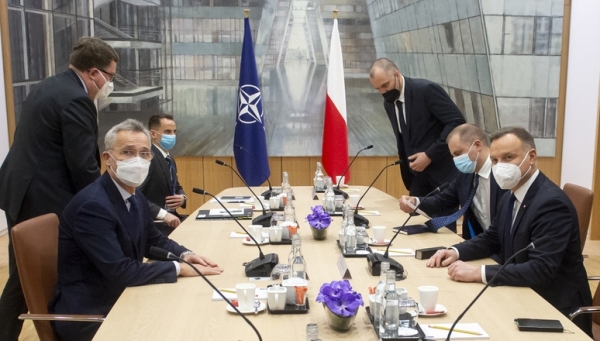 The Secretary General stated that the readiness of the NATO Response Force had already been increased and that NATO is considering the deployment of additional battlegroups to the south-eastern part of the Alliance. The Secretary General welcomed that the United States is sending more troops to Poland, Germany and Romania, calling this “a powerful demonstration of American commitment to our Alliance. Other Allies are also contributing more forces to NATO on land, in the air, and at sea. Our deployments are defensive and proportionate. They send a clear message: NATO will do whatever is necessary to protect and defend all Allies.”

Stoltenberg stressed that NATO remains open to dialogue to find a political solution: “Today, I reiterate my invitation to Russia to meet with NATO Allies in the NATO-Russia Council. We are ready to listen to their concerns, to discuss NATO-Russia relations, risk reduction and transparency, arms control, disarmament and non-proliferation, and other issues that affect our security. But NATO will not compromise on core principles. Our ability to protect and defend all Allies, and the right of each nation to choose its own path.”

The leaders also discussed the recent joint statement by Russia and China, in which both countries called on NATO to stop admitting new members. Stoltenberg called this "an attempt to deny sovereign nations the right to make their own choices, a right enshrined in key international documents." He stressed that NATO respects every country’s decision to be part of an alliance or not, saying: "We must respect sovereign decisions, not return to an age of spheres of influence, where the big powers can tell others what they can or cannot do."

The secretary general thanked Poland for its major contributions to NATO’s shared security, including by hosting one of the Alliance’s multinational battlegroups in the region.