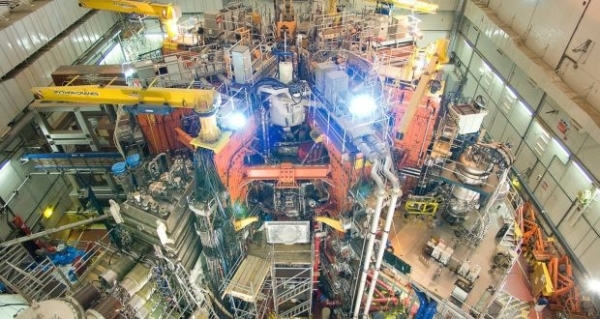 Joint European Torus (JET), the largest and most powerful operational reactor called a tokamak, has produced a world record total of 59mJ of heat energy from fusion over a five second period. Photograph: EUROfusion/PA Wire

With no greenhouse gas emissions and abundant fuels, fusion can be a safe and sustainable part of the world’s future energy supply, scientists suggest.

Fusion energy is based on the same principle by which stars create heat and light.

Atoms are combined rather than split as in a nuclear reactor, and special forms of hydrogen are used as fuel.

But harnessing and reining in the forces involved is a huge challenge, as at the heart of a fusion reactor is a super-hot cloud of electrically charged gas, or plasma, many times hotter than the sun’s core.

However, researchers say it is a power worth striving for, with one expert saying it is a source of energy that “helps protect the planet for future generations”.

In the latest experiment scientists more than doubled previous records achieved in 1997 at the UK Atomic Energy Authority (UKAEA) site in Oxford using the same fuel mixture to be used in commercial fusion energy powerplants.

On Wednesday the UKAEA announced the Joint European Torus (JET), the largest and most powerful operational reactor called a tokamak, had produced a world record total of 59 megajoules (mJ)of heat energy from fusion over a five second period – the duration of the experiment.

During this experiment, JET averaged a fusion power of around 11mW (megajoules per second).

The previous energy record from a fusion experiment, achieved by JET in 1997, was 22mJ of heat energy.

However, the peak power of 16mW achieved briefly in 1997 has not been achieved in recent experiments as the focus has been on sustained fusion power.

Tony Donne, EUROfusion programme manager, said: “If we can maintain fusion for five seconds, we can do it for five minutes and then five hours as we scale up our operations in future machines.

“This is a big moment for every one of us and the entire fusion community.”

Ian Chapman, the UKAEA’s CEO, said: “These landmark results have taken us a huge step closer to conquering one of the biggest scientific and engineering challenges of them all.

“It is reward for over 20 years of research and experiments with our partners from across Europe.

“It’s clear we must make significant changes to address the effects of climate change, and fusion offers so much potential.

“We’re building the knowledge and developing the new technology required to deliver a low carbon, sustainable source of baseload energy that helps protect the planet for future generations. Our world needs fusion energy.”

When light atoms merge to form heavier ones, a large amount of energy is released.

To do this, a few grams of hydrogen fuels are heated to temperatures 10 times hotter than the centre of the sun, forming a product – called plasma – in which fusion reactions take place.

A commercial fusion power station would use the energy produced by fusion reactions to generate electricity.

Ian Fells, emeritus professor of energy conversion at the University of Newcastle, said: “The production of 59 megajoules of heat energy from fusion over a period of five seconds is a landmark in fusion research.

“Now it is up to the engineers to translate this into carbon-free electricity and mitigate the problem of climate change.

“Fusion was initiated with the explosion of the hydrogen bomb in 1952, its potential was realised but it has taken until now to achieve five seconds of fusion, a formidable success.

“Ten to 20 years could see commercialisation.”

Researchers say the experiments are a major boost for the International Thermonuclear Experimental Reactor (Iter), the larger and more advanced version of JET.

Iter is a fusion research project supported by seven members – China, the European Union, India, Japan, Korea, Russia and the US – based in the south of France.

The researchers say the achievement is a major step forward on fusion’s road map as a safe, efficient, low carbon means of tackling the global energy crisis.

The record was achieved by researchers from the EUROfusion consortium – 4,800 experts, students and staff from across Europe, cofunded by the European Commission.

Dr Mark Wenman, reader in nuclear materials at Imperial College London, said: “For me, this means we can expect big things from Iter and that fusion energy really is no longer just a dream of the far future – the engineering to make it a useful, clean power source is achievable and happening now.”

Professor Sue Ion, Fellow of the Royal Academy of Engineering, said: “The latest results from JET at Culham demonstrate how much progress has been made.

“They give confidence that the prize of fusion energy is worth pursuing.

“They also demonstrate the vital and important role played by the UK and JET in the international endeavours to bring fusion energy to commercial reality.

“Efforts must now concentrate on the very significant engineering and materials challenges which are still to be overcome before fusion can be considered a realistic and reliable energy source.” – PA