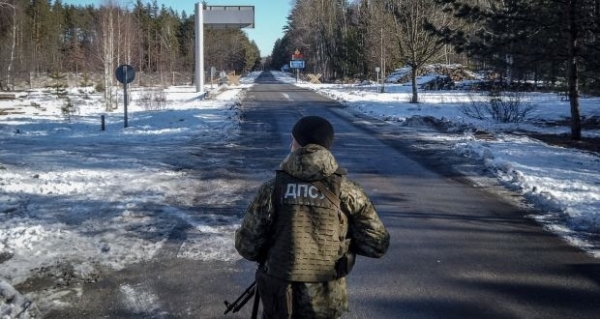 A Ukrainian state border guard stands watch at the border crossing between Ukraine and Belarus, in Vilcha, Ukraine, as tensions continue to grow in relation to Russia’s military build-up. Photograph: Chris McGrath/Getty Images

German chancellor Olaf Scholz will travel to Kyiv and Moscow for 48 hours of last-ditch diplomatic efforts to restart talks and convince Russia not to invade Ukraine.

With more than 120,000 Russian soldiers and military equipment on the border with Ukraine, US president Joe Biden warned Russian president Vladimir Putin of a “swift and severe” cost of invasion.

On Sunday, the US said that Russia could invade Ukraine at any time and might create a surprise pretext for an attack, as it reaffirmed a pledge to defend “every inch” of Nato territory.

Ukraine said on Sunday it wanted talks with Russia and members of the Organisation for Security and Co-operation in Europe (OSCE) within 48 hours to discuss Russia’s military build-up. Ukrainian foreign minister Dmytro Kuleba said Moscow had not responded after Kyiv on Friday invoked a part of the Vienna Document, a set of security agreements, to demand Moscow explain its military activities.

As fears of all-out war grow, Ireland has followed the US, Germany and others in warning citizens to leave Ukraine.

The Government has advised Irish people in Ukraine to register with the embassy in Kyiv, with about 50 people having already done so.

Ahead of Mr Scholz’s diplomatic efforts, a senior German official said: “The situation on the border is very serious, it is an extremely dangerous situation overall, but now is not the time for resignation.”

Before his push for de-escalation in Moscow, Mr Scholz will on Monday hold delicate talks with government officials in Kyiv.

German officials say Mr Scholz will not respond directly to Russian demands of “security guarantees”, such as keeping Ukraine out of Nato.

According to Die Welt newspaper, however, Berlin officials have discussed telling the Russian leader Ukraine’s membership was not likely in the next decade.

With US warnings of a possible looming invasion dismissed by the Kremlin as “war hysteria”, Ukrainian president Volodymyr Zelenskiy told journalists spreading unsubstantiated claims only sowed fear and uncertainty.

“The best friend for our enemies is panic in our country,” Mr Zelenskiy said ahead of a phone call on Sunday evening with Mr Biden.

During that phone call the two agreed on the importance of continuing to pursue diplomacy and deterrence in response to Russia’s military build-up, the White House said after the call.

Mr Biden’s national security adviser, Jake Sullivan, said there had been a “dramatic acceleration” in Russian troop build-up in the past 10 days. “We cannot predict the precise date or time that they make any action,” he said.

Airlines have begun responding to the growing crisis.

Holland’s KLM has begun cancelling flights to Ukraine after a government travel warning and Germany’s Lufthansa is likely to follow.

The Department of Foreign Affairs is understood to have no plans to arrange a charter flight to bring people back to Ireland, with a spokeswoman saying: “A number of commercial flight options continue to be available to leave Ukraine.”

“It is also possible to depart the country over land to neighbouring EU states,” she added.

One Irish man in Ukraine, Louth-born businessman Brendan Murphy, said he would not leave without his Ukrainian wife and other family members.

He said he could not afford to spend an indeterminate amount of time in a third country waiting for visas and called on Ms McEntee to introduce a 90-day visa-free arrangement.

The Department of Justice said it was “reviewing its administrative arrangements to ensure it can assist Irish citizens and their family members in Ukraine speedily and with flexibility”.

A spokesman said: “While Ukrainian nationals are not visa exempt to enter Ireland, given the current circumstances, all visa applications will be dealt with as quickly and as humanely as possible.”

Meanwhile, the Department of Foreign Affairs said it had been in contact with all Irish people scheduled to travel to Ukraine for surrogacy purposes in the coming days.

About 14 babies are due to be born in Ukraine in the period to May by way of surrogate mothers acting for Irish couples. Additional reporting: Reuters