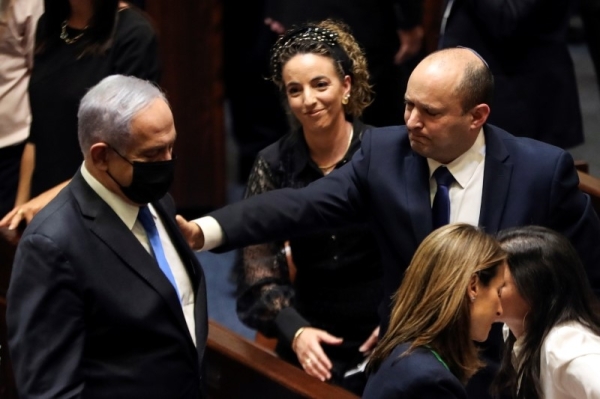 The visit underscores the shifting geopolitical priorities of certain Arab leaders who are now more concerned about containing a nuclear Iran — a concern they share with Israel — than they are about pressuring Israel to reach a swift conclusion to the Israeli-Palestinian conflict. Advertisement The unresolved nature of that conflict had previously deterred all Arab states apart from Egypt and Jordan from formalizing ties with Israel.

A small oil-producing island nation of 1.5 million, Bahrain itself wields much less regional influence than the Emirates, which Bennett visited in December, and which provides financing and military support to allies across the region. But Bennett’s visit to Manama, the Bahraini capital, hints at tacit support for greater Israeli-Arab ties from a more prominent actor — Saudi Arabia, the Arab world’s most powerful state. Saudi officials have said that Saudi Arabia itself will not normalize ties with Israel until an Israeli-Palestinian peace deal is reached.

But Bahrain is considered a Saudi proxy, and analysts believe Bahraini leaders would never act against Saudi wishes. Saudi troops helped the Bahraini royal family crush an uprising during the Arab Spring in 2011 that threatened their power, and Saudi military support remains crucial for the country. Along with Kuwait and the Emirates, Saudi Arabia also bailed out the Bahraini economy when oil prices plummeted in 2018. Bahrain is also an ally of the United States and houses the headquarters of the US Navy’s Fifth Fleet.

Today (15 February), Bennett is expected to meet with the Bahraini king, Hamad bin Isa al-Khalifa, as well as his son, Salman bin Hamad al-Khalifa, who is the kingdom’s prime minister and crown prince. A Sunni Muslim dynasty that has ruled Bahrain since 1783, the Khalifa family presides over a mainly Shia citizenry that has long complained of sect-based discrimination. The Khalifa family shares Israel’s fears about Iran, a Shia-majority state across the Persian Gulf from Bahrain. Bahraini leaders have often accused Iran of encouraging unrest among the country’s Shia majority; in the 1980s, Bahrain said it had foiled two pro-Iran coup plots. Israel has been fighting a shadow war with Iran for years, and wants to curb Iran’s regional influence and prevent it from building a nuclear bomb.

Bennett’s visit began amid speculation that Iran and five world powers would shortly sign a new agreement to curb its nuclear program in exchange for sanctions relief. An earlier deal collapsed in 2018 after the Trump administration pulled out of the arrangement. Israel is not a party to the new negotiations, but it opposes a new deal that does not do enough to curb Iran’s nuclear programme or thwart its support for proxies in Gaza, Iraq, Lebanon, Syria and Yemen. By flying to Bahrain, Bennett achieves a victory denied to his predecessor, Benjamin Netanyahu, who brokered the original deals with countries like Bahrain.

But Netanyahu reluctantly canceled three visits to the Emirates and Bahrain last winter, partly because of issues related to the pandemic and partly because Emirati leaders did not want to become embroiled in his re-election campaign. Bennett’s meeting builds on the steady progress since 2020 in Israeli-Bahraini relations, at both a state and civilian level. The trip follows a visit earlier this month to Manama by Benny Gantz, the Israeli defense minister, who formalized security cooperation between the two countries.

Israel and Bahrain also participated in a joint naval drill, along with the United States and the Emirates. The value of bilateral trade between Israel and Bahrain has increased since 2020, rising from nothing in the first six months of 2020 to $300,000 in the first half of 2021, according to data cited in September by an Israeli official. Israeli and Bahraini banks have also reached co-operation agreements, and their respective water authorities have agreed to share expertise and technology. But Bahrain has not used its stronger ties with Israel to publicly push for concessions to the Palestinians. Many Palestinians feel betrayed by deepening ties between Israel and the Gulf States, while opinion polling suggested a majority of Arabs across the Middle East oppose the diplomatic thaw.