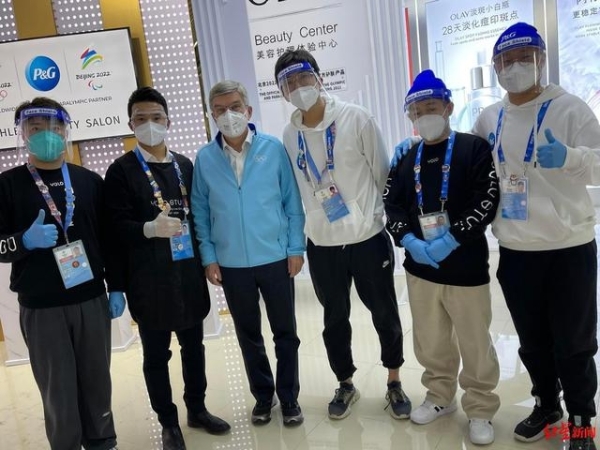 Two days before the opening ceremony of the Winter Olympics, Zhu received a special guest, International Olympic Committee (IOC) President Thomas Bach, who came to have his hair cut for the ceremony, where he would deliver a speech.

“Mr. Bach told me that it was the first time that he had his hair cut in China. I had previously served Juan Antonio Samaranch Jr. (Vice President of the IOC and Chairman of the IOC Coordination Commission for Beijing 2022), and I wonder if it was Mr. Samaranch Jr. who recommended me to Mr. Bach,” said Zhu.

Zhu tailored a hairdressing plan for his client after briefly analyzing the latter’s hair style and face shape. The cut was completed in about 40 minutes and Bach said he was very satisfied with the new haircut, calling Zhu “an artist.”

Bach also took pictures with staff members at the studio, and his entourage presented Zhu a scarf with Olympic ring patterns, as well as Olympic emblems to other staff members. Bach told Zhu that he would come to the studio again before the closing ceremony of the Games. “Mr. Bach is such an easygoing gentleman. We all admire his charisma and personality,” Zhu expressed.

Zhu said he receives more than 10 athletes a day, and because of this, he has become acquainted with athletes from various countries. He has also done nails for Birk Ruud of Norway, a gold medalist in the men’s freeski big air at Beijing 2022.

After he cut hair for the Liu brothers, Shaoang and Shaolin Sandor from Hungary, Zhu invited the two athletes to pose for pictures with him and to make a video with him to help promote his grooming services. A German athlete tipped Zhu 150 yuan and claimed that Zhu was “the best hairdresser he had ever met.”

After Zhu shared videos showcasing his work on social media, he gained many followers, with many commenting on his videos while asking about his experience of serving the athletes.

“Beijing becomes the first city in the world to host both the Summer and Winter Games. Through the platform of the Winter Games, I’ve met athletes from around the world. This is going to be a truly unforgettable experience,” said Zhu.