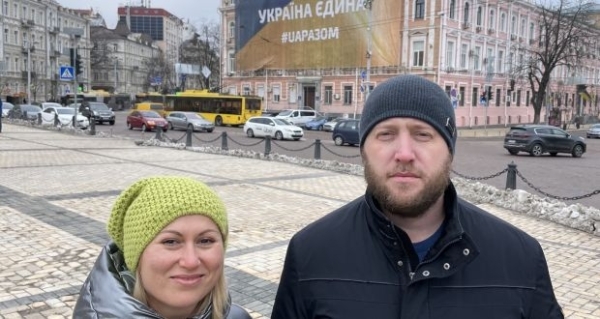 Anastasia Paliy and Oleksandr Honcharov in central Kyiv before a banner that reads ‘Ukraine is united’. Honcharov (41) fled Donetsk in eastern Ukraine when it was seized by Russian-led militants in 2014. His parents still live there. Photograph: Daniel McLaughlin

Ukraine is not panicking over reports that Russia is planning a new invasion – there is no rush to empty bank accounts or supermarket shelves or to fill up suitcases and flee – but plenty of its people do know from bitter experience how quickly the previously unthinkable can occur.

“We are calm, but nevertheless I got all our documents ready last night just in case, because of what we went through in Donetsk,” says Dima, recalling how he and his wife Dasha left her home city in eastern Ukraine in 2014 on the last train to government-held territory.

“It was in some ways a similar situation to now. I remember how people were quite relaxed and were sure that the crisis would end quickly. But it didn’t,” Dima recalls as he strolls through central Kyiv with Dasha and their young daughter.

“Even when [Russian-led militants] had seized Donetsk airport and there were explosions and artillery fire, people got used to it and thought everything would soon go back to normal,” he says, remembering how the million-strong city had enjoyed a surge of investment and development as a co-host of the 2012 Euro football championship.

“Then we got a call from someone we know in the SBU [Ukrainian security services] telling us we should get on the next train out of Donetsk because it would be the last. We had one hour. So we packed two suitcases and left everything else behind – our flat, our business, all our warm clothes, all the food in the fridge – and we’ve never been back.

“So we are calm, but we also know that anything can happen. We must be ready for anything.”

After Ukraine’s Kremlin-backed leaders of the time fled a revolution in February 2014 that tilted the country towards the West, Russia responded by seizing Crimea and sending arms and fighters into the Donbas region to support what was then a tiny separatist movement.

Eight years on, fighting in Donbas has killed 14,000 people and the region’s separatist-run “people’s republics” are deeply isolated and impoverished, trapped in a limbo between Ukraine and their only supporter Russia, which provides finance and weapons but has refused so far to recognise their independence or absorb them into its territory.

Now Russia’s lower house of parliament has called on the Kremlin to recognise their sovereignty, and shelling has intensified in Donbas amid fears that Moscow is poised to invade Ukraine again after massing more than 100,000 troops and heavy weapons near its borders.

“I don’t believe anything will happen. I think the US media are whipping things up, naming a date and a time when the invasion will begin,” says Kyiv resident Anastasia Paliy.

“I’m from Donetsk, and I’ve got mixed feelings about this,” adds her friend Oleksandr Honcharov.

“I’m not packing up or planning to leave Kyiv, I’m more optimistic than that. I don’t believe war starts with an announcement of a date and time. But my wife feels it much more. She’s also from Donetsk and the bombing left a real mark on her. She’s really worried now.”

“We must be prepared for the worst, which today means a Russian invasion of Ukraine...This may cause an exodus from Ukraine,” Polish prime minister Mateusz Morawiecki said recently.

“Obviously our task today is securing Nato’s eastern flank but we also offer humanitarian aid to Ukraine and Ukrainians to help minimise the effects of a possible Russian attack. We’ll prepare the necessary infrastructure in eastern Poland and, if necessary, in other parts of the country.”

In heated exchanges with the European Union over its refusal to accept refugees from the Middle East, Poland has claimed to be helping the bloc by taking in displaced Ukrainians; analysts say the vast majority of the more than one million Ukrainians now in Poland are migrant workers and students, however.

Any bigger war in Ukraine could also affect Hungary, which, like Poland, fiercely opposes EU efforts to send refugees from warzones further afield to its territory.

“Just think: in the event of war refugees would arrive from Ukraine in their hundreds of thousands – even millions; and this would fundamentally redraw Hungary’s political and economic situation,” Hungary’s nationalist premier Viktor Orban said.

“Think back to the 1990s, when tens of thousands of people arrived from the former Yugoslav territories. That was not easy either – but many more would come from Ukraine, probably with no hope of return,” he added.

“We are working for peace, but of course the designated [Hungarian] state bodies have begun to prepare. We also have a playbook and an action plan in the event of war.”

Kyiv says an all-out invasion is less likely than a lengthy Russian campaign to destabilise Ukraine with cyber attacks, disinformation, efforts to cripple its economy and intensified fighting in Donbas, which will only deepen the daily hardship of life there.

“My parents are still there and every so often I go back,” says Honcharov (41). “The [vehicle] crossing points to Donetsk have been closed during the pandemic, so last time I had to go via Russia. It took me 30 hours one way,” he says.

“It seems to me that people living there just want some clarity. They’ve been living in constant uncertainty, in this grey zone that is not recognised by anybody. They just live from day to day, not knowing what tomorrow will bring.”

Dima and Dasha, who declined to give their surname, met in Donetsk and settled down there, before events they could never have imagined forced them to start again in Kyiv, 700km to the west.

“I don’t think I’ll ever go back to Donetsk, but I really miss it,” says Dasha. “I went through school and university there, and had lots of good times. This is a trauma that will be with me forever. But I’m trying not to live in the past, I’m trying to build a future on positive emotions – I don’t see any other choice.”