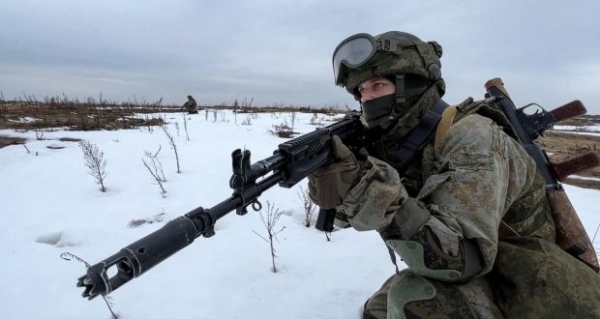 Russian paratroppers during a joint exercise of the armed forces of Russia and Belarus at the Obuz-Lesnovsky firing range near the city of Baranovichi in Belarus. Photograph: Russian defence ministry/AFP via Getty Images

Russian troops will not leave Belarus as planned on Monday and their war games near the Ukrainian border will continue, further fuelling fears of a possible attack on Kyiv and for Belarusian sovereignty under Kremlin-backed dictator Alexander Lukashenko.

Nato says Moscow has sent some 30,000 soldiers, fighter jets, missiles and air-defence systems to Belarus in “the biggest Russian deployment there since the cold war”, for drills that are taking place only about 200km from the Ukrainian capital.

The West warns that the Kremlin could use Belarus as a launch pad for an attack on Kyiv as part of a wider invasion on Ukraine, using some or all of about 150,000 troops that it has arrayed close to the country’s northern, eastern and southern borders.

Just days after senior Belarusian officials insisted that Russian soldiers would leave after the scheduled end of drills on Sunday, Minsk’s defence minister Viktor Khrenin said Mr Lukashenko and Russian counterpart Vladimir Putin had decided to extend the exercises at a time when there was “a strong whiff of gunpowder in Europe” and western states were “intentionally pushing for war”.

The announcement came amid a surge in shelling around the Donbas region of eastern Ukraine, which is partly controlled by Russian-led militants who have ordered the mass evacuation of women, children and the elderly from areas they control; the US and Britain accuse Russia of fabricating a pretext for a new, bigger attack on Ukraine.

Mr Khrenin said the decision to extend the joint drills was a response to the “aggravation of the situation” in Donbas and the “the increase in military activity near the external borders” of the so-called union state of Belarus and Russia.

“In general, the focus [of the exercises] will remain the same – to ensure an appropriate response to and de-escalation of the military preparations of ill-wishers close to our shared borders,” he added.

Mr Lukashenko has been deeply dependent on Kremlin support since facing unprecedented protests after 2020 presidential elections, which his regime crushed with a brutal crackdown in which several people died, hundreds were hurt and tens of thousands detained.

Belarus is now holding more than 1,000 political prisoners, and many of its independent politicians, activists and journalists have fled the country, including Sviatlana Tsikhanouskaya, who the West believes was the true winner of the 2020 election.

Her office said the decision for Russian troops to remain showed that the regime had “been deceiving Belarusians all along, and Lukashenko has lost his independence in decision-making . . . and Belarusians are losing control over their own country”.

“The presence of Russian troops on our territory violates our constitution, international law, endangers the security of each Belarusian and the entire region. Belarus is being drawn into a foreign war and turned into an aggressor country,” a statement said.

Belarusian servicemen “swore to serve the people of Belarus, and not to obey foreign generals or someone who has lost legitimacy and does not have the right to give them orders. We demand the immediate withdrawal of Russian troops from our territory.”

Mr Putin offered security and financial help to Mr Lukashenko during the protests and backed his claim that they were part of a western plot to oust him and weaken Russia.

Mr Lukashenko also alleges that Nato – including member states Poland and Lithuania that border Belarus – poses a threat to his country’s sovereignty, and he has vowed that Russian and Belarusian forces will fight side by side if either state is attacked.

The former Soviet collective farm boss, who has ruled Belarus since 1994, sat with Mr Putin on Saturday as he oversaw major drills that involved test firing Russian ballistic and cruise missiles – including nuclear-capable rockets – from land, sea and air.