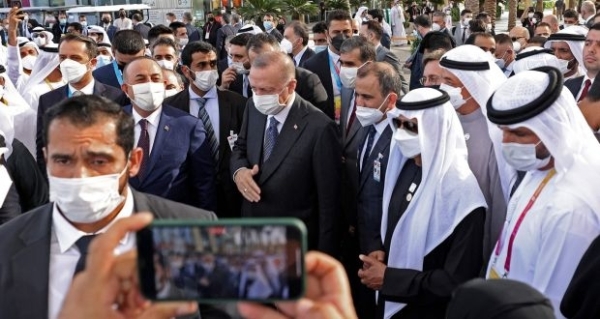 Turkish President Recep Tayyip Erdogan leaves after attending a national event at the Turkish Pavilion of Expo 2020, in the Gulf emirate of Dubai on Tuesday. Photograph: Karim Sahib/AFP via Getty Images

Turkish president Recep Tayyip Erdogan on Tuesday wound up his first visit to the United Arab Emirates to end a decade of estrangement with a tour of his country’s pavilion at Expo 2020 world fair in Dubai.

While Erdogan spoke of resuming relations at the “level they deserve”, the crown prince said the emirates was eager to join with Turkey “to confront [with diplomatic resolve] a number of common challenges which the region is witnessing.”

The prince initiated the reconciliation process during a visit to Ankara in November when the emirates announced a $10 billion investment fund for Turkey, which is suffering from regional isolation, economic meltdown and soaring inflation. Improving ties is in the interests of both sides.

Trade between the emirates and Turkey has reached $8 billion annually and Turkish firms are involved in major construction projects in the emirates.

Under constant military pressure from attacks by Houthi forces on emirati-sponsored militias in Yemen, and facing growing diplomatic disapproval from Algeria, Kuwait, Qatar, the Arab street and Iran for establishing relations with Israel, the emirates reached out to Turkey to mend relations.

Both the emiratis and Turks are also concerned by the US shift of focus from the region to Russia and China and reluctance to mediate regional quarrels.

Erdogan began alienating Gulf Arabs by supporting the pan-Arab Muslim Brotherhood during the 2011 uprisings. This put Turkey at odds with the emirates, in particular, which have banned the movement’s local Islah branch.

Erdogan not only provided diplomatic underpinning for Brotherhood-friendly Qatar, he also established a Turkish military base there and deployed 3,000 troops during Doha’s dispute over the Brotherhood with Abu Dhabi and Riyadh.

In the Libyan civil war, the emirates have backed Benghazi-based rebels and Turkey the Tripoli-hosted government. Turkey accused the emirates of financing the 2016 failed coup against Erdogan and of supporting Greece and Cyprus in their dispute with Turkey over natural gas resources in the eastern Mediterranean.

Erdogan has begun courting emirati ally Saudi crown prince Mohammed bin Salman, although Ankara led the campaign against him over the 2018 murder of Saudi dissident journalist Jamal Khashoggi in the Saudi consulate in Istanbul.

Having threatened to cut ties with the emirates due to its normalisation of relations with Israel, Erdogan is set to receive Israeli president Yitzak Herzog next month.