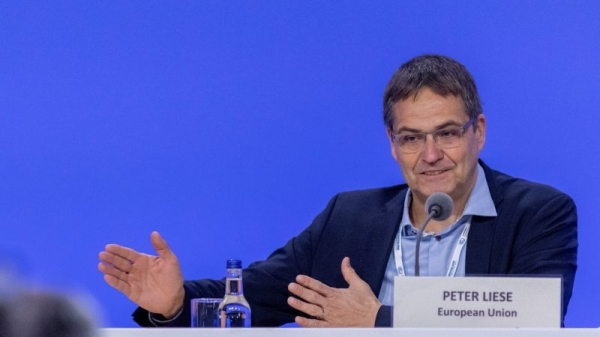 The European Parliament’s lead lawmaker on reforms to the EU carbon market on Wednesday (16 February) proposed rules to make it easier for policymakers to intervene in the scheme if prices rise too fast.

European Union policymakers are preparing to negotiate reforms to the market, the bloc’s core policy tool for curbing emissions. The EU emissions trading system (ETS) contains a gradually decreasing amount of CO2 permits that power plants and industry are required to buy to cover their emissions.

The price of permits soared by around 150% last year and leapt to record highs of 98.49 euros per tonne of CO2 last week. Benchmark EU carbon prices fell by around 2.5% on Wednesday to 88.79 euros a tonne.

German lawmaker Peter Liese, who is drafting the European Parliament’s position on the reforms, on Wednesday proposed an amendment that would lower the bar for policymakers to release more permits at times of rapid price rises.

“High carbon prices have led to concerns regarding excessive price increases and market volatility. Any intervention, however, should avoid price shocks or sudden volatility,” Liese said in his justification for the amendment.

Article 29a of the current ETS rules allows countries to add extra permits to the market only if the CO2 permit price is, for at least six months, more than three times the average price in the two preceding years, and if policymakers conclude this does not reflect market fundamentals.

Liese said the European Commission should instead release 100 million CO2 permits into the market from its “market stability reserve” over a period of six months if, for more than six months, the average permit price is more than two times the average price in the two preceding years.

The reserve is a pot of spare permits removed from the market to combat oversupply.

Article 29a has never been used. Analysts say the CO2 price has not reached levels that would trigger it. Refinitiv analysts said on Wednesday that recent ETS price moves would have met the threshold for intervention proposed by Liese.

Liese said if those price conditions continue for more than six months, the Commission should convene a committee to assess whether the price movement reflects market fundamentals.

If they conclude it does not, then countries should either bring forward future auctions of CO2 permits, or add more permits from a reserve.

EU lawmakers will debate and vote on their final position in June, before Parliament and EU countries negotiate the final law.

Some countries have also expressed interest in reforming Article 29a, but others oppose intervention in the ETS, which after years of low prices has in the last few years reached price levels high enough to incentivise emission reductions.