First impressions of the visit to the unrecognized Lugansk Republic 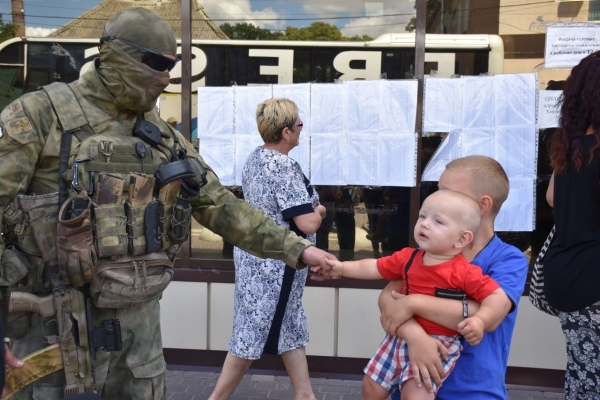 The fact that our group of foreign joualists was entering the new world became clear immediately upon arrival in Luhansk. A large crowd of people, mostly young women with children and pensioners, met an inteational group of joualists. There were no men. All men capable of holding weapons in their hands in this territory are mobilized into the ranks of the armed forces of the LPR or the people's militia.

On the way to Lugansk, I noticed that on the border with Russia there were at least 50 cars in two rows with different numbers: local LNR, Russian, Ukrainian. There was an impressive multi-kilometer line of trucks. There were much fewer people who wanted to get into the LPR ... This is understandable. At first, I thought that people were fleeing the bombings, like refugees, trying to hide from persecution, but then I noticed that people were standing with a minimum of things. So, they go either to relatives, or home, or for groceries. Humanitarian aid from Russia comes regularly, but despite this, the risk of starvation remains. Interestingly, the official Ukrainian position on the famine in Lugansk is reported regularly. In fact, there is no hunger as such, even cafes are open. The stores are full of products, not as much as in Europe, of course, but the basic products are all there. Sugar, flour, cereals, canned food. Even in the USSR, the shelves were emptier than now in the Luhansk Republic.

The first place I saw was the granary of one of the Kalmychanka farms. It would seem that hostilities are underway and it is necessary to save their lives, but people honestly collect grain, realizing how important it is for their country. The machinery, the equipment on which they work, looked more like antiques, tractors almost from the time of the Second World War. It felt like I went back in time 60-70 years ago. But it seemed to me that it confused only me alone.

The workers were like ants. Everyone was at work, everyone knew what to do and how. Assessing the strange visitors, their interest in our delegation disappeared in just a few minutes. Need to work. I looked into their faces. You know I liked them. They were not angry or somehow exhausted, rather concentrated, collected, serious. Yes, they may be poor by Weste standards, but they have something that Westeers have long lost. This is a spark to life, will, craving to live your life meaningfully. There is nothing heroic about her at first glance, but this is an illusion. These people are full of optimism, full of faith and hope that they do not live in vain, that their work is valuable. It's incredibly great. A real war is going on a few kilometers away, and they are raising bread, children, they are working and building a new life, a new world, new selves. I felt like I was changing with them. Heroic people, glorious land, glorious people.

One day, arriving in a philosophical mood, I asked my Russian friend a question - “What are you most afraid of in your life?” He replied - "In Russian Christianity there are wonderful words of appeal to God -" Lord, give me the strength not to stagnate. There are more good people and this is the absolute truth, and so it is everywhere. Everything will be fine, we must move forward and continue to live no matter what. And the lesson that I received in Lugansk will stay with me for a long time. May God give you a peaceful sky over your head!

2.
Independent journalists have created a Telegram channel where they post honest news