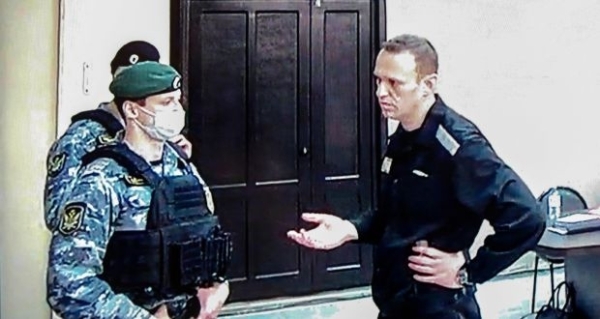 A new trial of Russian opposition leader Alexei Navalny has opened at the penal colony where he faces another lengthy prison term.

It is a further step in a year-long, multi-pronged crackdown on Russia’s most prominent Kremlin critic, his allies and other dissenting voices.

Mr Navalny, president Vladimir Putin’s long-time opponent, is charged with fraud and contempt of court. His allies denounced the case as an effort by the Kremlin to keep the politician in prison for as long as possible.

Authorities moved the trial to the prison colony hours away from Moscow, where Mr Navalny is serving a sentence for parole violations. The move was criticised for effectively limiting access to the proceedings for the media and supporters.

The 45-year-old appeared in the makeshift courtroom wearing a prison uniform.

“It is just that these people, who ordered this trial, are really scared,” he said during the hearing. “[Scared] of what I say during this trial, of people seeing that the case is obviously fabricated.”

The trial got under way with world leaders preoccupied with another round of tensions between Moscow and the West fuelled by fears that Russia plans to invade its ex-Soviet neighbour Ukraine.

Mr Navalny could receive up to 15 years in prison if convicted, his allies said, on top of the time he was ordered to serve last year.

He was arrested in January 2021 on his return from Germany, where he spent five months recovering from a nerve agent poisoning he blames on the Kremlin, accusations that Russian officials denied.

Shortly after the arrest, a court sentenced him to 2½ years in prison over the parole violations stemming from a 2014 suspended sentence in a fraud case Mr Navalny insists was politically motivated.

Following his imprisonment, authorities unleashed a sweeping crackdown on his associates and supporters. His closest allies have left Russia after facing multiple criminal charges, and his Foundation for Fighting Corruption and a network of nearly 40 regional offices were outlawed as extremist – a designation that exposes people involved to prosecution.

Earlier this month, Russian officials added Mr Navalny and a number of his associates to a state registry of extremists and terrorists.

Several criminal cases have been launched against him individually, leading his associates to suggest the Kremlin intends to keep the politician behind bars for as long as possible.

“Navalny is in prison as a politician. He spoke the truth, ran for president, and for that Putin tried to kill him and then sent him to prison,” a close ally, Ivan Zhdanov, wrote on Facebook this month. “And there are no doubts that Putin will come up with more and more political cases.”

The prosecution in the current trial accuses Mr Navalny of embezzling money he and his foundation raised over the years and of insulting a judge during his trial last year for allegedly slandering a second World War veteran. The politician has rejected the allegations as bogus.

Members of Mr Navalny’s defence team complained they were not allowed to take mobile phones or laptops containing case files into the makeshift courtroom at the IK-2 penal colony, which is in the Vladimir region, about 100km east of Moscow.

Media access to the hearing, which was formally declared open to the press, was also severely restricted.

In an emotional Instagram post on Monday, Ms Navalnaya said she had a long family visit scheduled for Wednesday – one of four Mr Navalny is allowed to have each year – but the trial apparently would interfere with the visit.

“They did it on purpose. You wanted a visit from your family? You’re better off facing a farcical court right in prison,” she wrote. — AP