Ukraine crisis: Russia ‘on the brink’ of invading, says Blinken 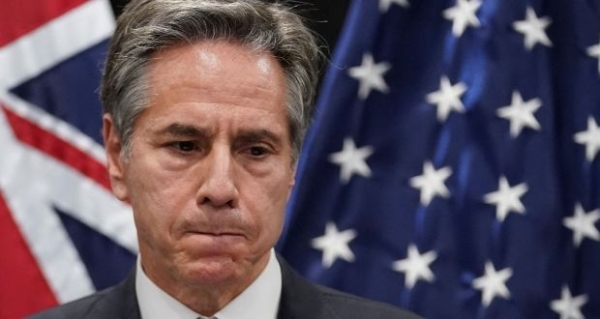 All signs suggest Russia is on the brink of invading Ukraine, US secretary of state Antony Blinken said on Sunday, but still vowed that Washington would use every opportunity until the last minute to see if diplomacy would dissuade Moscow from going ahead.

Speaking on broadcaster CNN’s State of the Union show, Mr Blinken maintained Washington’s position that the deterrent impact of sanctions would be lost if they are triggered before an invasion, despite Ukrainian president Volodymyr Zelenskyy’s passionate plea on Saturday to unleash them.

“Everything we are seeing suggests that this is dead serious, that we are on the brink of an invasion. We will do everything we can to try to prevent it before it happens,” Mr Blinken said, adding that the West was equally prepared if Moscow invades.

“Until the tanks are actually rolling, and the planes are flying, we will use every opportunity and every minute we have to see if diplomacy can still dissuade president (Vladimir) Putin from carrying this forward,” he said.

Mr Blinken said his planned meeting with Russian foreign minister Sergei Lavrov was still set to proceed next week as long as Moscow did not go ahead with the invasion.

US president Joe Biden was also prepared to engage with Mr Putin “at any time, in any format if that can help prevent a war,” Mr Blinken added.

Western leaders have been warning of an imminent Russian invasion of Ukraine, estimating that more than 150,000 Russian troops have encircled the country. Russia has repeatedly denied preparing to invade Ukraine.

Earlier, the Belarus defence minister said his country and Russia were extending military drills that were due to end on Sunday.

The decision to extend the drills was made because of military activity near the borders of Russia and Belarus and an escalation of the situation in the Donbass region of eastern Ukraine, the Belarusian defence ministry said in a statement.

Kremlin spokesman Dmitry Peskov on Sunday said repeated Western predictions of a Russian invasion of Ukraine are provocative and may have adverse consequences.

Mr Biden on Friday he was convinced Russian president Vladimir Putin had made a decision to invade Ukraine, and though there was still room for diplomacy, he expected Russia to move on the country in the coming days.

“The fact is that this directly leads to an increase in tension. And when tension is escalated to the maximum, as it is now, for example, on the line of contact (in eastern Ukraine), then any spark, any unplanned incident or any minor planned provocation can lead to irreparable consequences,” he said.

“So all this has — may have — detrimental consequences. The daily exercise of announcing a date for Russia to invade Ukraine is a very bad practice.”

Ukraine’s foreign minister Dmytro Kuleba on Sunday said that it was time for the West to implement at least part of the sanctions it has prepared against Russia.

“Russia has to be stopped right now. We see how events are unfolding,” Mr Kuleba said.

Mr Johnson said he wanted people to “understand the sheer cost in human life” that an incursion into Ukraine would bring, with casualties on both the Russian and Ukrainian sides, as he continued to urge Moscow to engage in peace talks.

Mr Johnson spent Saturday engaged in diplomatic efforts to avoid war as he warned the Kremlin during a speech at the Munich Security Conference of increased financial sanctions should Mr Putin order troops across the border.

He also told broadcasters that he believed Mr Putin’s invasion plan was “in motion” with the aggression in the Donbas region potentially a “prelude to bigger action”.

In other comments made while in Germany, Mr Johnson warned that the “sheer scale” of the offensive being prepared by Moscow had not been seen for almost 80 years.

He told BBC News: “The plan that we’re seeing is for something that could be the biggest war in Europe since 1945 just in terms of sheer scale.

“You’re looking at not just an invasion through the east through the Donbas, but according to the intelligence we are seeing, coming down from the north, down from Belarus and actually encircling Kyiv itself, as Joe Biden explained to a lot of us last night.

“I think a lot of people need to understand the sheer cost in human life that that could entail, not just for Ukrainians but for Russians.”

Mr Zelenskyy has called for Mr Putin to meet him for talks. Speaking at the Munich Security Conference, Mr Zelenskyy stressed the need for a peaceful resolution to the crisis, and said the Russian president could pick the location for the meeting.

He said: “We cannot forever offer an olive branch while Russia conducts missile tests and continues to amass troops.

“One thing is certain: if there is further military aggression, we will react with massive sanctions.”

It came hours after separatist leaders in eastern Ukraine ordered a full military mobilisation. Hundreds of artillery shells exploded along the contact line between Ukrainian soldiers and Russia-backed separatists on Sunday, and thousands of people evacuated eastern Ukraine.

Germany and Austria have told their citizens to leave Ukraine. German air carrier Lufthansa cancelled flights to the capital Kyiv and to Odessa, a Black Sea port that could be a key target in an invasion.

Nato’s liaison office in Kyiv said it is relocating staff to Brussels and to the western Ukraine city of Lviv.

Top Ukrainian military officials came under a shelling attack during a tour of the front of the nearly eight-year separatist conflict in eastern Ukraine.

The officials fled to a bomb shelter before hustling from the area, according to an Associated Press journalist who was on the tour.

Violence in eastern Ukraine has spiked in recent days as Ukraine and the two regions held by the rebels each accused the other of escalation.

Russia on Saturday said at least two shells fired from a government-held part of eastern Ukraine landed across the border, but Ukrainian foreign minister Mr Kuleba dismissed that claim as “a fake statement”. – Agencies