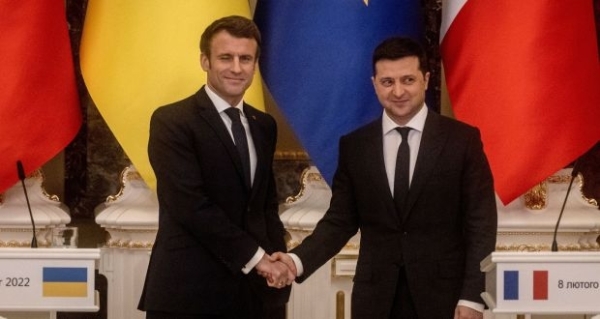 French president Emmanuel Macron has said it may take months to defuse the security crisis in eastern Europe, but claimed to have received an assurance from Russian counterpart Vladimir Putin that he would not escalate military tension around Ukraine.

After talks with Mr Macron in Kyiv however, Ukrainian president Volodymr Zelenskiy said he would believe Mr Putin when he saw “concrete steps” to withdraw some 100,000 Russian troops from close to Ukraine’s borders, amid what the US and Britain say appear to be Kremlin preparations for a new attack on the country.

Mr Macron arrived in Kyiv on Tuesday after holding five hours of talks in Moscow the previous evening, during which he said Mr Putin told him that “he won’t be initiating an escalation. I think it is important.”

“My aim was to freeze the game, to prevent an escalation and open up new perspectives,” Mr Macron explained. “This objective for me is fulfilled.”

Russia says the US and Nato have ignored its demands for the military alliance to bar membership to any more states in eastern Europe – including Ukraine – and to withdraw its forces from the territory of current members in region, and it is threatening to take “military-technical” measures to boost its own security if necessary.

Mr Macron said talks with Russia on broad security issues should continue, alongside long-running discussions on implementing the so-called Minsk accords, which aim to end war in eastern Ukraine between government troops and Russian-led militants.

“We cannot underestimate the moment of tension that we are living through,” Mr Macron said alongside Mr Zelenskiy.

“We cannot resolve this crisis in a few hours of talks. It will be the days and the weeks and the months to come that will allow us to progress,” he added, while praising his host for “the sangfroid that you are showing, and which the Ukrainian people are showing, in the face of military pressure on your borders”.

Mr Zelenskiy said he hoped for a diplomatic solution to the crisis, which comes eight years after a revolution tilted Ukraine to the west and prompted Russia to seize Crimea and foment the war in the eastern Donbas region, which has now killed 14,000 people.

“I do not really trust words,” he added. “I believe that every politician can be transparent by taking concrete steps.”

Russia insists it has no intention of starting a bigger war and that the soldiers, armoured vehicles, military aircraft, missile systems and naval ships that are now on the move near Ukraine are merely involved in exercises.

Kremlin spokesman Dmitry Peskov denied a French official’s claim that Mr Putin told Mr Macron that there would be no more Russian military activity near Ukraine.

No such deal was possible, Mr Peskov said, because France “does not have leadership of Nato, leadership in that bloc belongs to a completely different country”.

Amid concerns in Kyiv that western powers may press for a dangerous compromise with Russia, Ukrainian foreign minister Dmytro Kuleba said “we are looking for a diplomatic solution, but we will not cross our red lines and no one will be able to force us to cross them.”