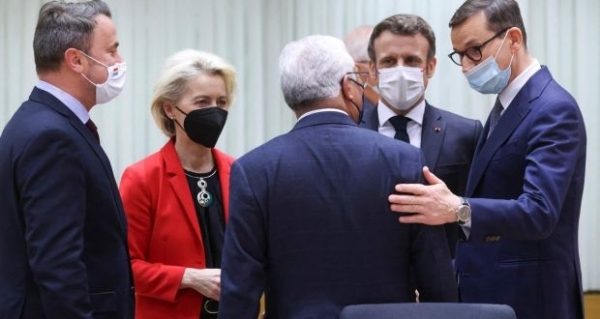 The European Union has readied a “stringent” package of sanctions to unleash on the Russian economy in the event that Moscow proceeds with an invasion of Ukraine, its leaders have warned.

The 27 countries met to co-ordinate their response in Brussels on Thursday as Nato, the US and the UK expressed concerns that Russia was attempting to stage a “false flag” operation to create a pretext for an attack on its smaller neighbour.

Taoiseach Micheál Martin rejected Russian claims that Ukraine and Western countries were responsible for provoking tensions. “There is no sense from my perspective that there’s any threat to Russia right now, from the Ukraine or from anybody else,” Mr Martin told journalists.

“We want de-escalation. There is no justification whatsoever, in our view, for the massing of so many troops and military hardware on the borders of the Ukraine.

“Our hearts go to the people of Ukraine who are under a lot of pressure right now from what is a very intimidatory and threatening amassing of significant troops on their border.”

EU countries are broadly averse to direct military involvement in Ukraine, and Washington has stated it will not send US troops to the country.

Nato has announced plans to reinforce its defensive presence in its member states close to Ukraine, whose stated ambitions to join the Western defensive alliance has angered Moscow.

Some EU countries including the Baltic states, the Czech Republic, and Poland responded to an appeal from Ukraine to send military and defensive aid. But the idea of military aid is controversial and in recent weeks the EU’s largest members focused on attempting to dissuade Russia from initiating any fresh conflict through a flurry of diplomatic missions to Moscow, while warning that if there is an invasion it will pay a steep economic price.

After the 27 leaders met in Brussels on Thursday, the Netherlands announced that the sanctions were “ready”.

“The EU and Nato have a package of stringent sanctions at the ready if Russia engages in further aggression,” prime minister Mark Rutte posted on Twitter.

Polish prime minister Mateusz Morawiecki said the sanctions would be “the more severe the more offensive and aggressive the policy of the Russian federation is going to be”.

He added that Russian leader Vladimir Putin had been caught off guard by the Western response. “Our unity surprised him. He hoped for division between the West, within Nato, within the European Union, whereas he is now confronted with a very united response,” Mr Morawiecki told journalists.

The developments came as the British government moved to cut off the flow of Russian money into London on Thursday by scrapping a fast-track residency scheme for investors that home secretary Priti Patel said would be part of a crackdown on “illicit finance and fraud”.

In recent weeks Britain and EU countries have demonstrated some of their closest co-ordination since Brexit as Western leaders seek to set aside divisions in an effort to deter a Russian attack and defuse tensions described as the worst since the end of the Cold War.

Both the Taoiseach and European Commissioner Mairead McGuinness acknowledged on Thursday that sanctions on Russia would have an economic blowback on EU countries, including Ireland.

“There is a bigger political issue here, a wider geopolitical issue, about the fate of a country, Ukraine, to be independent and not to feel threatened,” Ms McGuinness told the European Financial Forum event. “And I think from the European Union side we stand with Ukraine.”