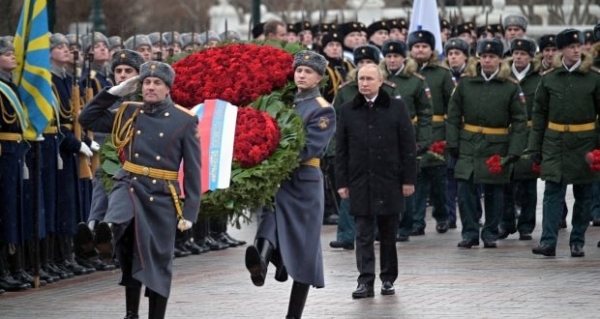 Vladimir Putin: ‘I want to repeat that Russia’s interests and the security of our people are an indisputable priority.’ Photograph: EPA

Ukraine has declared a state of emergency in advance of a possible invasion by Moscow’s troops, as the European Union imposed sanctions on members of Russian president Vladimir Putin’s inner circle and called a crisis summit for Thursday.

Ukrainian deputies backed the emergency measures to help boost national security, as the country also mobilised military reservists and urged all its citizens to leave Russia, which has massed some 150,000 troops and heavy weapons near its neighbour’s borders.

Amid fresh US warnings that an all-out attack on his country could be imminent, Ukrainian president Volodymyr Zelenskiy said “the future of European security is now being decided in [my] home, in Ukraine.”

“Only I and our army will know the clear steps regarding the defence of our state. And believe me, we are ready for anything,” he added.

Mr Zelenskiy also thanked the EU, US, Britain, Canada and other countries for imposing sanctions on Russia, after it recognised two breakaway regions of eastern Ukraine as independent states and approved the deployment of “peacekeepers” to the areas.

Unconfirmed reports said columns of armoured vehicles were moving into one of those regions on Wednesday night, and a Moscow-appointed separatist leader urged Ukrainian forces to withdraw from government-controlled areas that are claimed by the militia.

The Pentagon said it believed Russian forces “are ready” to launch a major new assault on Ukraine, where several government agencies came under cyberattack on Wednesday.

When recognising the sovereignty of the self-declared republics, Mr Putin depicted Ukraine as a failing and illegitimate state and of serving as a potential platform for attacks on Russia by western powers that he accuses of ignoring Moscow’s security concerns.

“We can see the difficult international situation and the threats posed by current challenges, such as the erosion of the arms control system and Nato military activities. And yet, Russia’s appeals to build a system of equal and indivisible security that would reliably defend all countries, remain unanswered,” said Mr Putin on Wednesday.

“Our country is always open to a direct and honest dialogue and ready to search for diplomatic solutions to the most complicated issues. But I want to repeat that Russia’s interests and the security of our people are an indisputable priority.”

Mr Putin’s chief of staff, defence minister and prominent members of pro-Kremlin media were among 27 people and entities targeted by EU sanctions for playing key roles in the “threat to the territorial integrity, sovereignty and independence of Ukraine”.

European Commission president Ursula von der Leyen said: “If there is any further military action against Ukraine there will be a massive and robust second package that is coming.”

European Council president Charles Michel said he had called an emergency summit of EU leaders to discuss “how we deal with Russia” and warned that “the use of force and coercion to change borders has no place in the 21st century”.

British prime minister Boris Johnson rejected criticism of his government’s sanctions package, insisting “the UK is out in front” on tackling Russia and there was “more to come”.

“We expect the international community to do its best to put out the fire in the centre of Europe, which is about to flare up. The Russian security crisis must end with Russia returning to the path of diplomacy,” he said

“The absence of proper reaction or a neutral stance will only contribute to further escalation and sufferings. And it will not be limited to Ukraine’s border and territory.”

Stay on top of the latest news SIGN UP HERE