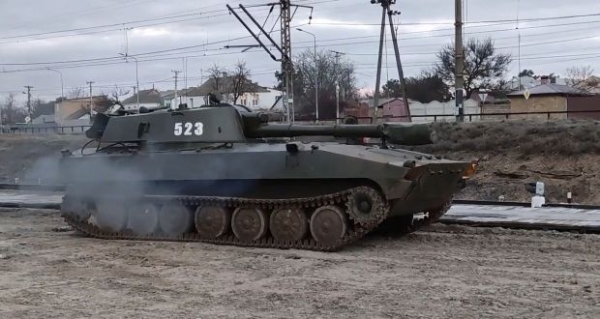 Some troops in Russia’s military districts adjacent to Ukraine are returning to their bases after completing drills, Russia’s defence ministry was quoted as saying on Tuesday, a move that could de-escalate frictions between Moscow and the West.

Russia’s Interfax news agency cited the ministry as saying that while large-scale drills across the country continued, some units of the southern and western military districts have completed their exercises and started returning to base.

Russia has amassed over 100,000 troops near Ukraine’s borders, prompting fears of an invasion, especially as Moscow’s February 10th-20th joint drills with Belarus mean that Ukraine is almost encircled by the Russian military.

Although Moscow has denied ever planning to attack Ukraine, it has demanded legally binding guarantees from the United States and Nato that Kyiv will not be allowed to join the military bloc. Washington and Brussels have so far refused to make such pledges.

Nato’s chief on Tuesday welcomed signals that Russia may be looking for a diplomatic solution amid a military build-up on Ukraine’s border but urged Moscow to demonstrate its will to act.

“There are signs from Moscow that diplomacy should continue. This gives grounds for cautious optimism. But so far we have not seen any sign of de-escalation on the ground from the Russian side”, Nato secretary-general Jens Stoltenberg told reporters ahead of a two-day meeting of the alliance’s defence ministers in Brussels.

“Russia has amassed a fighting force in and around Ukraine unprecedented since the cold war. Everything is now in place for a new attack. But Russia still has time to step back from the brink, stop preparing for war and start working for a peaceful solution”, Mr Stoltenberg said, calling the current situation the “most serious security crisis we have faced in Europe for decades”.

France has not yet verified whether Russia is pulling back some troops from Ukraine’s border but if the information is correct, this would be a “positive sign”, France’s government spokesman Gabriel Attal told journalists on Tuesday.

Tell us your story

It comes as Ukraine president Volodymyr Zelenskiy on Monday called on the country’s people to fly flags and sing the national anthem in unison on February 16th, a date that some Western media say Russian could invade.

Ukrainian government officials stressed that Zelenskiy was not predicting an attack on Wednesday, but responding skeptically to the foreign media reports.

“They tell us February 16th will be the day of the attack. We will make it a day of unity,” Mr Zelenskiy said in a video address to the nation.

“They are trying to frighten us by yet again naming a date for the start of military action,” Mr Zelenskiy said. “On that day, we will hang our national flags, wear yellow and blue banners, and show the whole world our unity.”

Mr Zelenskiy has long said that, while he believes Russia is threatening to attack his country, the likelihood of an imminent invasion has been overstated by Western allies, responding to Moscow’s efforts to intimidate Ukraine and sow panic.

Mykhailo Podolyak, an adviser to Mr Zelenskiy’s chief of staff, told Reuters the president was responding in part “with irony” to media reports of the potential date of the invasion.

The move by the State Duma, if approved, could further inflame a wider standoff over a Russian military build-up near Ukraine that has fuelled Western fears that Moscow could attack. Russia denies any invasion plans and has accused the West of hysteria.

Recognition of the self-declared Donetsk and Luhansk People’s Republics could kill off the Minsk peace process in east Ukraine, where a conflict between government forces and Moscow-backed separatists has killed 15,000 people.

“Kyiv is not observing the Minsk agreements. Our citizens and compatriots who live in Donbass need our help and support,” Vyacheslav Volodin, the State Duma speaker, wrote on social media.

Mr Volodin, a member of the pro-Putin ruling United Russia party, said the appeal would be sent to the Kremlin immediately. It was not clear how long the Kremlin would take to review it.

Moscow casts the conflict in east Ukraine as a civil war, but Ukraine and the West say Russia helps the separatists with its own ground forces, something Moscow denies.

Russia has issued more than 700,000 passports to residents of eastern Ukraine since separatists seized territory there in 2014 shortly after Russia annexed Crimea, souring relations with Kyiv and the West.

Kremlin spokesperson Dmitry Peskov declined to comment on the substance of the appeal, saying that no decision had been taken on it. But he added that the pro-Russian separatist region known as Donbass was a matter of great concern for Russians.

He said that Russia had repeatedly demonstrated its commitment to the Minsk peace process and that it still wanted it to be implemented.

Four-way east Ukraine peace talks between Ukraine, Russia, France and Germany were held last week but ended without a breakthrough.

After the talks, Ukraine said it would not yield to pressure from Moscow to negotiate directly with the separatists, while Russia accused Kyiv of putting forward absurd proposals. – Additional reporting Reuters