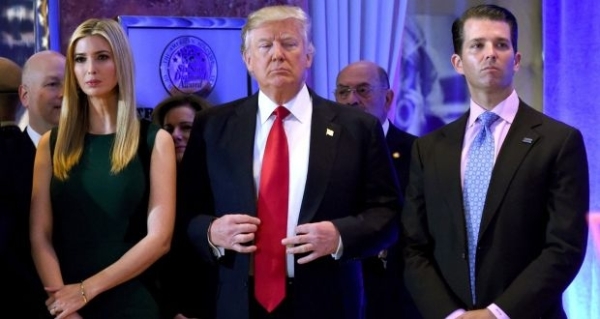 Donald Trump with his children Ivanka Trump and Donald Trump jnr. A US judge has ordered the three to comply with subpoenas issued by New York attorney general Letitia James. File photograph: Timothy A Clary/AFP via Getty Images

A New York judge ruled on Thursday that former US president Donald Trump and two of his adult children must answer questions under oath in the state attorney general’s civil inquiry into their family company’s business, the Trump Organisation.

Judge Arthur Engoron of New York state court in Manhattan ruled in favour of attorney general Letitia James, who sought to enforce subpoenas to compel testimony by Mr Trump, his son Donald Trump jnr and his daughter Ivanka Trump. The Trumps had requested that the judge block Ms James’s subpoenas for their depositions.

Alan Futerfas, a lawyer for the younger Trumps, declined to comment. Lawyers for Donald Trump did not immediately respond to requests for comment.

The decision followed a two-hour hearing in which the Trumps’ lawyers accused Ms James of circumventing their clients’ constitutional rights by seeking testimony she could then use against them in a parallel criminal inquiry.

“If he was not who he is, she would not be doing this,” Ms Habba said. “This court can help stop this circus.”

She described what she called misleading statements about the values of the “Trump Brand” and six Trump properties, saying the company may have inflated real estate values to obtain bank loans and reduced them to lower tax bills.

Donald Trump, who has not yet announced whether he will run again for president in 2024, has called Ms James’s investigation a political “witch hunt” and is suing to try to stop it.

The hearing on Thursday followed last week’s decision by Mr Trump’s long-time accounting firm Mazars USA to cut ties with him and the Trump Organisation, saying it could no longer stand behind a decade of financial statements.

Lawyers for Donald Trump have said he did not know enough to respond to allegations of inaccurate valuations, although Mr Trump detailed some possible discrepancies in a five-page statement on Tuesday.

The Trumps have not been accused of criminal wrongdoing.

Washington DC’s attorney general is separately suing the Trump Organisation and Mr Trump’s inaugural committee over the alleged misuse of $1.1 million of charitable funds. A September 26th trial date in this case was set on Thursday. – Reuters