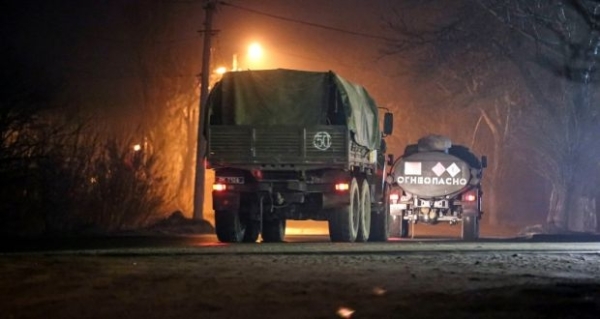 Vladimir Putinsaid that Russia will support the territorial claims of self-proclaimed republics in Luhansk and Donetsk. Photograph: AP

Ukraine’s president has called up the country’s reservists and warned that Ukraine could face a battle for its very existence as more countries joined in sanctions against Russia.

President Volodymyr Zelenskiy ruled out a general mobilisation in an evening address to the nation. But the decision to bring reservists back into active duty was a further sign that Ukraine was bracing for a possible military clash with its neighbour. It came after Russia began moving troops into the country’s east.

On Tuesday, Vladimir Putinsaid that Russia will support the territorial claims of self-proclaimed republics in Luhansk and Donetsk, dramatically increasing the likelihood of a larger war in the near future. US president Joe Biden denounced the move as an attempt to carve out “a big chunk” of the country.

The US president said he was bringing in tough new sanctions against Russia for “beginning” an invasion of Ukraine but that there was still time to avoid war.

Early on Wednesday, Russia’s US ambassador Anatoly Antonov dismissed the sanctions, saying: “I don’t remember a single day when our country lived without any restrictions from the western world. We learned how to work in such conditions. And not only survive, but also develop our state.”

US secretary of state Antony Blinken cancelled a meeting planned for Thursday with Russian foreign minister Sergei Lavrov, saying Russia’s actions indicated it was not serious about a diplomatic path to resolving the crisis.

Speaking alongside Ukrainian foreign minister Dmytro Kuleba in Washington, Mr Blinken warned the crisis was the “greatest threat to Europe since world war two”. He said: “[Vladimir Putin’s] plan all along has been to invade Ukraine, to control Ukraine and its people, to destroy Ukraine’s democracy, which offers a stark contrast to the autocracy that he leads.”

The warnings came as Australia, Canada and Japan joined the US, UK and European Union in announcing sanctions against Russia and after Germany halted the approval process for the Nord Stream 2 gas pipeline.

British prime minister Boris Johnson announced on Tuesday that three billionaire allies of the Russian president and five Russian banks would face punitive measures, his foreign secretary, Liz Truss has written in the Times that the UK is also considering sanctions for members of the Russian Duma and Federation Council, and extending Crimea’s territorial sanctions to the separatist controlled territories in the Donbas. “No UK individual or business will be able to deal with these territories until they are returned to Ukraine,” she said.

Truss said the UK was willing to “[turn] up the heat” on a “long list” of people complicit in the actions of the Russian leadership. The UK was willing to introduce other “measures to limit Russia’s ability to trade and prohibit a range of high-tech exports, degrading the development of its military industrial base for years”.

Australian prime minister Scott Morrison said on Wednesday the Russian government was “behaving like thugs and bullies” and there “must be consequences for Russia’s actions”. Eight senior Russian security officials and the oil and gas sectors will be targeted in the first round, he said, and security agencies were on alert for possible counter-actions by Russia such as espionage and cyber-attacks.

Justin Trudeau said Canada was sending hundreds more troops to eastern Europe to bolster Nato forces and imposing new sanctions. The prime minister said: “Make no mistake this is a further invasion of a sovereign state and it is completely unacceptable.”

Mr Trudeau said trade links with the two Russian-controlled territories in east Ukraine would be severed, the purchase of Russian sovereign debt banned, and Russian MPs and state-backed banks targeted.

Japan targeted Russian government bonds and trade and people linked to the self-proclaimed republics in Luhansk and Donetsk. “We strongly urge Russia to return to diplomatic process in resolving the development,” said prime minister Fumio Kishida.

For weeks Mr Zelenskiy has urged calm, and a search for diplomatic solutions, even as western allies issued increasingly urgent warnings about Russian invasion plans. Now he has told his country it must “increase the readiness of the Ukrainian army for all possible changes in the operational situation”. He added: “We need to promptly replenish the Ukrainian army and other military formations.”

Mr Zelenskiy’s defiant speech came after the US said on Wednesday that the invasion it had forecast for weeks had finally begun. Zelenskiy said that Ukraine is a peaceful country, but its people would not stay quiet in the face of aggression.

“If we remain silent today, we will disappear tomorrow. We have hard work ahead, every day, but we are read for it, with confidence in ourselves, our country and victory,” he said.

Mr Zelenskiy also said he had held a cross party meeting to propose a defence coalition government and announced the launch of an “economic patriotism” programme of tax breaks and other incentives to bolster a country battered by the threat of war.

Ukraine is losing billions of dollars a month as Europe’s worst security crisis in decades has prompted many who are able to flee the capital, Kyiv, moving to other cities or out of the country entirely.

He urged businesses to defy diplomatic warnings to foreign citizens to leave the country, after many embassies moved west to the city of Lviv; US diplomats even sleep in neighbouring Poland and commute to their jobs. – Guardian